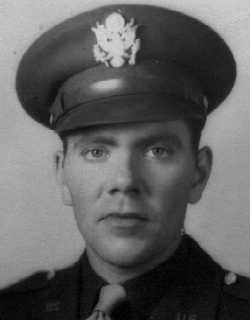 The primary purpose of this web site is to honor the memory of the men of the 112th Regiment, 28th Infantry Division, in World War II. I hope it will serve also as an educational tool for students of that period, and guide its readers to further and more detailed accounts. This is a "reader's site." Its centerpiece is a monthly record, a unit history, kept by Lieutenant Robert "Bud" Flynn of the 112th Regiment, 2nd Battalion. Along with this contemporary account I provide my own monthly summaries of the fighting, as well as relevant excerpts from numerous historical records. Together I hope that these readings will supply the student with a deeper insight into the nature of warfare and of the fighting man, in one particular time and place, not all that long ago.

The 28th Infantry Division, known as the Keystone Division, arrived in Europe in late July of '44, just as the Allied forces had begun at great human cost to "break out" of their narrow Normandy beachhead. They were "green," these troops of the 28th. As historian Martin Blumenson writes (in The Duel for France: 1944), "The 28th Division demonstrated the usual errors of a unit newly committed to combat, sustaining on its first day of attack almost 750 casualties." Yet all through this summer the men of the 28th were learning: they were learning how to fight, how to endure, how to take ground under fire, and even how, just maybe, to survive.

The German forces were eventually compelled to retreat, though at heartbreaking expense to the Allies. All the rest of that summer the Allied armies pressed the Germans eastward, across France, through Luxembourg and Belgium. The Allies were by now supremely confidant. Many believed the war would soon be over. But once within Germany's well-fortified border, Hitler's armies turned and fought, and now ensued some of the most bitter struggles of the war, in places like Arnhem, Aachen, and all around the little cross-roads town of Bastogne.

The 28th was in the thick of this fighting. Indeed, in November, in a rugged forest known as the Huertgen, the struggle was incredibly fierce, and for the Keystone Division tragic. Then, in December, this "band of brothers" would find itself directly in the path of a massive German counter-attack, known later as the Battle of the Bulge.

Lieutenant Robert "Bud" Flynn was a soldier in the 28th Division, 112th Regiment. He was his company's executive officer and its "unit historian." This meant that one of his responsibilities was to keep a log of his unit's activities. From day to day, this log was a simple record of where they went, the nature of their deployment, the kind of resistance they faced, and the number of casualties they took.

What follows is Lieutenant Flynn's unit history. It covers the period beginning August 1, 1944, and ending January 31, 1945. In itself it is not a particularly dramatic account, nor was it meant to be. The emotions of war reveal themselves here only in veiled and sometimes ironic guise. But if we read this history along with other accounts of the period, including personal memoirs of some who were there, a picture emerges. It is not exactly the "big picture." It is the picture of one Division, made up of mostly 18 to 20 year old men, whose experience over this six month period follows a trajectory from youthful cockiness and innocence, through demoralizing and mind-boggling tragedy (even, in the eyes of some, disgrace), and on again to yet another fight for survival in the snowy and corpse-strewn woods and fields of the Ardennes.

Lieutenant Flynn, in after-years, never talked about his wartime experiences. This was not uncommon. Other men who fought with the 28th did not begin to tell their own stories of that time until as many as fifty years later. All warfare is of course hard and bitter, but the nature of the fighting in Huertgen especially, and the deadly incompetence of some of the commanders, made the memories of that time especially gruesome and difficult to face.

Lieutenant Flynn died in 1978. His children never really understood what he had endured back in 1944, what he had given of himself, or what he had seen other men give. Of course no one who has not known war first hand can ever truly understand it. A gulf always lies between those who "were there," and those who were not. The historian's task is only a special form of the human task: that is, to bridge these gulfs between people. We hardly ever do this well, or for long. The ones who were there have to be willing to tell us what it was like, and the ones who were not there have to care enough to listen. Seldom do these two conditions seem to coincide.
Posted by Bob Spencer at 4:46 AM