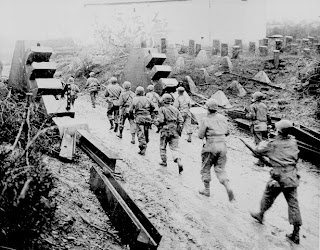 In the month of December the 112th played a part in one of the largest battles in world history.  Having been decimated by the November fighting in the Huertgen, they were selected to man a quiet sector of the long Allied front, where they could get some much needed rest and build up their fighting strength.  This "quiet sector" was in the Ardennes Forest, and it happened to be just the place that Hitler himself had chosen to launch one last all-out counter-offensive that would make or break the Reich.

This massive clash of military antagonists would come to be known as the Battle of the Bulge.  It's story has been told many times, and the following portion of Lt. Flynn's unit history is especially interesting when read in conjunction with one of these histories (see bibliography on this web site).  But what should be noted is that the 112th , having already endured some of the most difficulty fighting of the war, was again thrown into the maelstrom, and faced the challenge with flying colors.
December Campaign Maps
Allied Operations Against the West Wall (8 November- 15 December 1944)
Allied Operations Against the West Wall (15 December 1944)
German Ardennes Counter-Offensive (16- 25 December 1944)

On the 1st of December, we are still in a holding position in Lieler, Luxembourg, which for our company is comparatively quiet with the exception of a few rounds of artillery which the enemy drops in every day to let us know he is still there.

The Second Platoon was charged with the responsibility of outposts # 1, 2, & 3.

The 3rd Platoon was charged with the responsibility of outposts 7, 8, 9, & 10.  The farthest O.P. being off approximately 2 miles from Lieler.
Te company is mainly concerned with having superior fighting foxholes dug for each man. It seems sort of needless in such a quiet position, but proved to be most valuable as we will eventually learn.

While at Lieler the men have been getting passes to Paris, Arlon, and Clervaux for 48 hours.  We have movies probably as often as once every 2 weeks, and an opportunity to have showers and get clean clothes at the shower point in Clervaux.

On the 15th, G. Company was withdrawn to Weiswampach for training purposes, which meant that E. & F. Co. had to take over and defend the Battalion sector.  This meant cutting down the number of men on each of up to half of the original number, and the addition of 2 new O.P.s which were listening posts on high ground east of and overlooking the river, which later proved to be of great value, as all later attempts by the enemy to penetrate through these points were repulsed by 3 men.

At 0630 on the 16th after having heard a terrific enemy barrage to the left of our sector, we received a report that enemy patrols had infiltrated through the 3rd Battalion sector, and as a consequence alerted all O.P.s.

At 0745 Outguard #9 received enemy small arms fire from the vicinity of the bridge.  About a Platoon of riflemen each armed with an automatic rifle had taken a defensive position around the bridge to cut out our communications.  An enemy machine gun was occupying one of our posts across the river from #9.  [Our jeep moving toward the bridge, unaware of what was going on, was stopped, and the driver from H. Co., and Rollins & Harvey, were temporarily pinned down by fire from the squad holding the bridge.--this sentence crossed out]

Lt. Flores, and T Sgt. Stephens with 5 men of the 3rd squad of the 3rd Platoon captured about 30 men trying to protect the bridge.  They also captured the rest of the company in a patch of woods.  Their mission was to take and hold the bridges for their own use.  They were armed with auto rifles & bazookas.  From 9 to 12 of their company were killed, and from 18 to 20 killed by our men.  We had no casualties.

G. Co. pushed through our sector early in the afternoon, and forced the enemy back to the ridge.

On the 17th, 2 patrols of about 6 men each were eliminated by the same squad under Lt. Flores and S/Sgt. Bowman from the new #9 O.P.  One was taken prisoner.

That night we moved back to Weiswampach by Battalion order and started digging a defensive position.  The division is split and we are attached to 106th Div.

Early the next morning we left Bieler by foot and withdrew to Clervaux & Bovigny near Salm Chateau and set up a defensive position.

Unbeknown to us, we were very much in danger of being overrun and surrounded by the enemy from the time we left Bieler and arrived at Salm Chateau.  Had it not been snowing on the morning we left Bieler, the enemy whose tanks were within point blank range of our positions, would have had most excellent observations to play with us as a cat does with a mouse who doesn't stand a chance of escaping. --Attached to 7th Armored Division.

On the morning of the 22nd we moved by foot to Burtonville, arriving at about 1300.  It is still a tight spot, and even though we are able to delay the enemy somewhat it is still necessary to keep withdrawing to keep from being encircled.

That night we left Burtonville by foot and marched through Vielsalm to keep from being trapped and proceeded to the town of Cheneaux, arriving there at 0200 in the morning of the 23rd.  The men were completely exhausted from the amount of marching they have been doing since leaving Lieler, and took advantage of the opportunity to billet in houses for the remainder of the night, and safely behind a line which is being held by the 82nd Airborne Division.  We stayed here until 1500 when we moved by truck to the Petit Seminaire de St. Roch in the town of Ferrieres.  Lt. Flynn assigned to Co. 2, 1st Platoon.

Here the men had an opportunity to catch up to themselves, get their equipment cleaned, get new equipment, and catch up on rest, which obviously is much needed by all the men.
We spent Christmas Day at the Seminary, and dinner consisted of K-rations, but no one squawked about that, being so well aware of the fact that it could be much worse.

On the 27th, Lt. Beggs was relieved of Duty with E. Co. and assigned to Service Co., as S-4 for the 3rd Battalion.

Lt. Hansen has the 2nd Platoon, Lt. Grossman the 3rd Platoon, and Lt. Flores the 4th Platoon.
The Regiment is now known as Task Force 112.

On the 28th, we left the Seminary and moved to a wooded area near Sadzot.  We are attached to the 75th Division, with the mission as part of the Battalion to fill a gap between 2 Battalions of the 289th Regiment of the 75th Division.  The 3rd Platoon took a position on the Right, the 2nd on the left, and the 1st in support.

Captain Fischer was relieved of command and transferred to Regiment.  1st Lt. Eldeen H. Kauffman F. Co. was assigned to us as Company Commander.  PFC David was missing from a patrol of 6 men that night.

On the 29th we were ordered to change our position, extending more to the left in relatively the same disposition for the platoons, the 1st having the responsibility of protecting the left flank.

On the 31st the 2nd & 3rd Platoons attacked the enemy position at the top of the hill and were forced back to the former position by the superior fire power of the enemy.
Robert F. Flynn
1st Lt., 112th Infantry
Unit historian