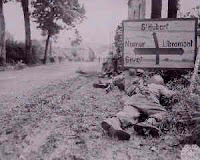 "No one knew it yet, but the pursuit was over. The troops were soon to discard, as one division historian later wrote, 'the carnival garlands, ribbons, and souvenirs gathered during the liberation parade' through Northern France, Belgium, and Luxembourg. They were soon to be caught up again in hard fighting." Blumenson, Duel for France: 1944

On October the 1st, we are still with [several words illegible here] 2 miles southeast of Burg Reuland, on the receiving end of the Red Cross Clubmobile, movies, showers, and clean clothes. We stayed here until the 4th, when we moved by truck at 0700 for Wurtzfeld, arriving there at 1500.

On the 5th, PFC Henry (Chip) Chop whom we lost near Ger, was reassigned to the company. The Oct. 3rd edition of the Stars and Stripes caught up with us, carrying a lengthy item of the Division's activities up to the 20th of September.

On the 6th, we moved by foot 3 miles, to a point in Krinkelter Wald, which is about 1 mile east of the town of Krinkelt. It is so dark at night, the only way to get from one tent to another, is by azimuth, and remembering the number of paces.

Although we are in a holding position, we have plenty of artillery support. The 229th FA Bn. which we normally have in support, has 65 artillery pieces attached to it, which includes 155s, 240s, and self-propelled guns, not to mention the two squadrons of p-47s, and there is plenty of artillery (friendly) going over head all day long, and most of the night. One thing we are getting plenty of, is rain. From authoritative sources comes the statement that the weather here is the worst it has been for 80 years, and far be it from anyone in our Company to doubt it.

The World Series seems to be stealing the show from the war news, not only in the Division daily and the Stars and Stripes, but also in the conversations of the men.

The 12th, was liquor ration day for the officers, and was celebrated accordingly.

Friday the unlucky 13th seems to have brought no ill will or bad luck to anyone.

On the 15th, we moved back into the town of Krinkelt for scheduled training, showers, clean clothing, movies, free haircuts, and a darn good USO show, as well as an abundance of rain at every mealtime.

On the 16th, Major General Cota came to the area to pass out a few wards and to talk to the men. Before he left, he had pinned a Bronze Star on the manly chest of Lt. Orozco, And PFC Edward A. (Stinky) Stankevicus. Sgt. Clarence Plansky was awarded the Bronze Star, posthumously, we regret to say.

On the 17th, we moved to the Regimental forward area in Krinkelter Wald, and old Jupe Pluvius is still favoring us with rain, rain, and more rain.

On the 23rd we moved back into an assembly area in Wurtzfeld, pending an administrative move to nobody seems to know where, although the rumors are running rampant, and the consensus seems to be near Aachen. While here we had some movies, the Red Cross Clubmobile, and a training schedule to follow. Wurtzfeld seems to be on the Robot bomb route, and not an hour passes but what one goes by making its ungodly racket, and with sufficient propellant left in it to keep it going, and at the same time we are all hoping that they land in the channel.

On the 26th, we moved by truck to an assembly area 4 miles northeast of Rotgen, and not many miles south of Aachen. By some strange quirk of faith and maybe Col. Hatzfeld's suggestion, the kitchen moved into the same area with us which means that we get a hot three squares a day. On the 28th, we had movies. Casanova Brown, starring Gary Cooper.

On the 29th, we moved by foot to a point on the east side of the road running through Germeter, and about one mile west of the town of Vossenack.

T/5 Leonard G. Brown died of wounds received when the vehicle he was driving ran over a teller [?] mine. PFC Morris I. Wiener who was also in the vehicle, was wounded and evacuated by the Medics.

As the month ends, we are still in the area waiting to see what turns up next, and wondering what it will be.