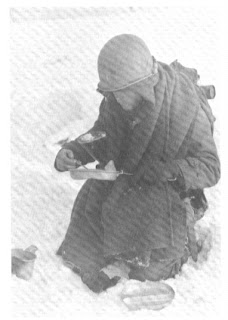 On the 1st we were still in a defensive position on the hill due south of Kayserberg, Alsace, activity being limited to mutual sniping and sporadic mortar and artillery fire.  [?] has been thawing for several days with generous [?] of rain, and the foxholes are not holding up too well, although the snow is disappearing fast.

On the 2nd we moved down the eastern slope into the well-beaten town of Ammerschwihr (?).  As part of the Battalion which is in regimental reserve for an attack to the south, we advanced to the top of Bornthalkpf Mt., and dug in a defensive position for the night.  No resistance was met.  E Company defended the left front of the Battalion.

On the morning of the 3rd, we advanced to the west in the approach march formation with the mission of clearing any enemy from Le Roche de Corbeau, a mountain just to the east of the town of Labaroche.  After having cleared the top, and all the men who were pretty well tuckered out from their climb, were thinking about getting ready to stay there for the night, the company was ordered to proceed to Labaroche.  From Labaroche we were ordered to proceed to La Place, take up a defensive position, and contact F Company on our left flank.  The roads and fields in the whole sector were heavily mined with anti-personnel and anti-vehicular mines, which caused the men to wonder as they advanced forward, if the next step would be the one to cause the detonation, and it was impossible to detect them in the dark.

Before reaching our objective, we met elements of the 290th Engineer Battalion, and were given a guide who led us to La Place where B Company of their [?] in a holding position.  We arrived there at 0200 on the morning of the 4th, ready to sleep anywhere after an exhausting trek which started at 1000 the previous day.  Because of the Engineers, we were able to tuck ourselves right in, and not have to even have local security, a situation of which we wasted no time in taking advantage.  At daybreak the 1st Platoon was sent to Les Mulles to relieve F Company.  We were subjected to considerable enemy 12o mm mortar and artillery fire, although we suffered no casualties.

Early on the morning of the 5th, the 1st Platoon was ordered to move forward and take a position southwest of La Place.  From here we proceeded by foot in the approach march formation through Ciragouette, around La Grand Honack Mountain, and on to the town of Walbeck.  The 3rd Battalion had already cleared the town, so we continued on to the town of Turkheim, arriving at 1600.  We were billeted in houses for the night.

On the morning of the 7th, we moved by truck to the town of Husseren les Chateaux.  We were billeted in houses here, and due to the tactical situation it was only necessary to put out local security.  The kitchens moved into town with us later on in the day, which was a substantial boost in morale, being that we have been living on K rations for some time.

On the 8th, the Battalion was chosen to represent the Division in a parade at Colmar.

The 10th was payday, and although there was no place in town to spend money, it probably wasn't impossible to increase or decrease one's bankroll a la dice, poker, etc.

While here we had training during the daytime, with emphasis on scouting and patrolling.  At night we had movies on two occasions.

On the 11th, the Company was given the mission of maintaining roadblocks in Strasbourg, Wasselone, Baccarat, Abreschweiler, and Montigny, to check for a truck which had been stolen from Division with valuable papers.

On the 13th, the Company assembled at Shermac where the CP was located, and returned to Husseren les Chateaux by truck.

At 0730 on the morning of the 14th, we left by truck, passed through St. Die, Luneville, Nancy, Toul, and arrived at Void at 0800.  This was a rest area for us, and we were billeted in houses.  We had a daily training schedule to follow, although at night we had movies, , and the men were given showers and clean clothing.

On the 19th we left Void by truck for Toul at 0730.  Here we entrained in 40 & 8 railroad cars, destination unknown, but rumors were running rampant.

On the 20th we arrived at Aachen at 1500.  We detrained and boarded trucks which took us to a point just east of Monschau.  From here we proceeded on foot to a wooded area about 5 miles west of the town of Schoneseiffen, arriving at 2100.  Here we went into bivouac for the night.  The notable event for the day was Lt. Kauffman's promotion to Captain, which he has been sweating out ever since Normandy and the hedgerows.

On the 21st, each man was given two bottles of beer "imported" right from the States, plus five bars of "civilian" candy, also imported from the states, not to mention the cigars which we received.  At noon we moved by foot to an area 1 mile east of Schoneseiffen where we relieved B Company of the 38th Infantry, which was in a holding position.  The 2nd Platoon was on the right and the 3rd on the left.  The 1st Platoon was in Battalion reserve.

On the 27th, Lt. Larsen was wounded by a friendly anti-personnel mine while on patrol, and evacuated.
On the 28th we were relieved by B Company of the first Battalion.  From here we moved to Schoneseiffen where we entrucked and moved to Rocherath, Belgium, arriving at 1600.  1st Lt. James W. Harrison Jr. was assigned to the Company and the 3rd Platoon.

Here we were "married" to C Company of the 777th Tank Battalion for mutual training in Infantry-Tank tactics.

T/Sgt. Allen Conrad was ordered to report to higher headquarters to take an examination for a battlefield commission, which is a very high honor for Sgt. Conrad, and all the men in the Company were pulling for him.

During the month, 5 men were recommended for silver Star awards, and one man for the Bronze Star.
The men were still receiving passes to Paris, and the V Corps rest area at Eupen, Belgium, for 48 hours at a time.
Robert F. Flynn
1st Lt., Infantry
Unit Historian