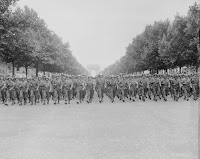 The 28th Division, of which the 112th Regiment was a part, arrived in France on July 24th, about six weeks after the D-Day invasion. This was a period of stalemate, in which the Allies, having secured a significant beachhead in Normandy, were yet surrounded by a determined and entrenched German force. The Allied offensive of early July was designed to "breakout" of Normandy pocket and eventually drive the German army back across. The battle was waged in a region known as the Bocage, and is sometimes called the Battle of the Hedgerows, for these mighty mechanized armies were often stymied by the tall hedgerows that surrounded each field and provided cover for enemy forces. The fighting here was particularly bitter and exhausting, but finally the "breakout" was achieved. The next phase would be the "breakthrough." After much heroic effort the Allied forces would extend their line across the Cotentin Peninsula in northwest France and begin to drive the enemy eastward. At this point the 28th in thrown into the action. Mostly fresh from the states, their battlefield efforts do not at first satisfy the high command. But on August 1 they help to take the town of Percy, then moving gradually eastward they are involved in serious fighting around Gathemo on the 10th, this last being a part of the effort to completely surround and crush a portion of the German Army in the Falaise Pocket. It was a significant defeat for the German Army, and forced them to hurriedly withdraw eastward. Thus, from mid-August to mid-September the story is one of German retreat (Lt. Flynn calls it "their famous retrograde action") and Allied pursuit. As a result, a sense of optimism spreads through the troops, a feeling that the tide had indeed turned. The month of August culminates with the the Division's triumphal parade through Paris on the 28th. By the end of the month they are still in pursuit of the back-pedaling and apparently doomed German Army.

On the 1st we are still engaged in battle begun the night before on Hill 210 near Maupartuia. The enemy had good observation of the hill from positions on higher ground, and had been putting plenty of 88 shells fire into our position. Tree bursts were responsible for a large percentage of the casualties. No fatalities occurred here, but the following were wounded: 1st Lt. McShane, T/Sgt. Fornabaie, S/Sgt. Busch, Cpl. Riley, PFC Coseboon, PFC McConnell, PFC Pennington, and Pvt. Counte.

During that night, the enemy withdrew, and the following morning we advanced to a point one mile from St. Martin, where we again ran into heavy enemy resistance.  Capt. Francis, our company commander, 1st Lt. Nelson, S-2, T/5 Haiman, and PFC Owen Paul were wounded. That night the enemy again pulled out, due to our mortar and machine gun fire, supplemented by supporting artillery and plenty of bombing by p-47s. No sound is more heartening than that of our own artillery ("Outgoing Mail") swishing overhead, and no sight is more welcome to our eyes than that of our planes diving into an enemy position to strafe or "lay a few eggs."

The next morning we advanced on foot to La Chienne de la Plaine where units of the 2nd Armored Division were engaged in a firefight with the enemy. We remained there for the night.

The following morning, August 4, we advanced to Le Mesnil, running into heavily mined and booby-trapped area on the way. Lt. Hedman was made Company Commander, and Lt. Robert F. Flynn of E Company was transferred to us to be Transportation Officer, and Company executive.

On the 5th, we advanced to a position at St. Manvieu de Bocage, still encountering plenty of mines, booby-traps, and 88 fire.

On the 6th, we advanced toward Hill 193, SE of Manvieu de Bocage and again ran into heavy resistance.  We were held up for a time by a farm at which Captain Plaskew was wounded by a tree burst of an 88 shell, Lt. Miller, was also wounded, and PFC Watts was killed by the same burst.  Sgt. Plansky, PFC Stanik, and Pvt.  Ogden were killed by 88 fire. That evening we continued the advance, and reached our objective under cover of darkness. S/Sgt. Harden, T/5 Slimmer, PFCs Bills and Wall, and Pvt. Mackell were all wounded. PFC Holumzer became sick and was evacuated.

On the 7th we received replacements.

On the 8th, we advanced toward La Juliere, but had to withdraw slightly, due to heavy enemy mortar fire. PFC Allen accidentally shot himself in the foot, and was evacuated. Pvt. Markham was evacuated due to sickness.  S/Sgt. Zande and Pvt. Peltz were both killed, and S/Sgt. Cohen, and PFCs Hellmuth and Scheffner were injured due to enemy fire.

On the 9th, we advanced to hill 246, which is several miles south of St. Germain de Tallevende. We encountered plenty of 88 and sniper fire here, and remained for the night. The following morning we advanced toward RW 338, which is due south of Hill 246. We were again held up by enemy fire. PFC Kambeitz and Pvt. Koval were both wounded.  Pvt. Smith died of wounds received on the 11th. On the 12th we crossed the E-W highway that comes into RJ 338, but were forced to withdraw by friendly artillery fire. As a result of this, the enemy, whom (sic) had been caught off guard, had a chance to reorganize, and we were unable to advance the following day. Lt. Col. Dreibelbiss, our Battalion Commander, S/Sgt. Burke, T/4 Blore, and PFC Poskie were wounded in action. T/5 Todd and PFC Gregor were both killed, and PFC Kirby was listed as missing.

On the 13th, we advanced to a point near Etan without meeting any resistance. We had a hot chow and remained here for the night. On the 14th we continued the advance. Lt. Hedman was injured by an enemy mine that morning. However, we met no active resistance, and moved to within 3 miles of Ger where we stayed for the night. There was a lot of knocked out German armored vehicles on the way, and this sight wasn't exactly demoralizing. T/Sgt. Descenze was assigned to us. Lt. Harvey was made Company Commander.

On the 15th we advanced through Ger to a point near Beauchine where we had a rest which lasted to the 20th. Here we received 8 men through transfer from other companies and 25 replacements. Captain James T. Nesbitt was assigned to us and is S-3. 1st Lt. Marvin Thiery was assigned to us also, and is Communications Officer.  S/Sgt. Jones and PFC Jensen were evacuated because of sickness. Here the men were given showers, clean clothing, and enjoyed a USO show. Nor did we goldbrick all the time, as we had a daily training schedule to comply with.

On the 20th, we left by truck for an area near Mortagne which is 60 miles East of Ger. Every time we stopped on the way, we were deluged with apples, tomatoes, etc., flowers and just about any kind of "likker." The people seem to be more friendly; the deeper we get into France.

On the 21st, we marched 4 miles eastward to another bivouac area without meeting any resistance. On the 22nd, we advanced to a point about 2 miles north of Breteuil. We did encounter some 88 anti-tank fire, but not for long, as the enemy was mostly concerned with his famous retrograde movement.

On the 23rd, we advanced to and through Conches, a point near Emanville, and went into bivouac, waiting for the British to catch up on our left flank.

On the 25th, some of the men heard a BBC broadcast over one of the numerous radios to the effect that "the British have taken the town of Conches without firing a shot."

On the 26th we left for Roudan, which is about 40 miles due east, and went into bivouac.

On the evening of the 27th, we left by truck, and arrived early the following morning at Versailles, where we bivouacked on the palace grounds.

On the evening of the 28th we left Versailles, again by truck, and where do we end up but in Paree, and while it is still daylight. We were the first Americans to get there, and the people were so glad and excited to see us, that it was difficult to get through the crowds that were in the streets to welcome us.  We spent the night in the Bois de Boulogne.  The next day everyone was busy shining up, cleaning up, shaving, etc; in preparation for the parade through Paris. Our division was given the honor of being the infantry division to be in the Parade. It started at the Pois de Boulogne. From there to the Arc de Troimphe, and down the Champs Elysees to where we passed in review.  From there to Le Bourget Field was one big bedlam of people handing out champagne, (honest-to-goodness stuff) wine, whiskey etc; flowers, kisses galore, and just about anything that would help to show their appreciation. We stayed at the Bourget Field for the night, the same field Lindbergh landed on in 1927.

On the 30th, we returned to the business as usual status, and advanced on foot to Survilliers without meeting any resistance. We stayed there for the night. The following morning we continued the advance to a point neat Senlis where we entrucked early in the evening. The month ended with us well on the way to Compiegne.