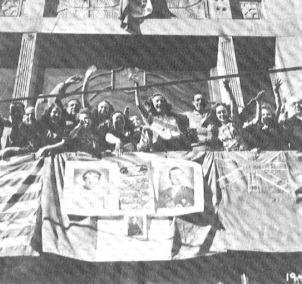 "The last week of August and the first week of September 1944 were among the most dramatic of the war.  The Allied Expeditionary Force swept through France, covering in hours ground that had taken months--years, really--and cost hundreds of thousands of casualties in World War I.  As the sons of the soldiers of the Great War drove north and east, they crossed rivers and liberated towns whose names resonated with the Tommies and Doughboys--the Marne, the Somme, Ypres, Meuse-Argonne, Verdun, the Aisne, Cambrai, St.-Mihiel, and the others.  As the Yanks, Brits, and Canadians passed the cemeteries, in some cases men were passing the graves of their uncles.  In a few cases, their fathers."  Stephen E. Ambrose, Citizen Soldiers, p. 77

The German forces in northern France had begun their retreat in mid-August, after narrowly escaping complete destruction in the Falaise Pocket.  From that point to well into September the war took on the character of a massive chase.  From Paris northeastward to the Belgian border these great armies rushed, the pursued and the pursuing.  For the Allies, the greatest difficulty now was logistics (keeping up a steady supply of food, ammo, gasoline) rather than German resistance.  The trick was simply to keep moving, to keep the pressure on.

Optimism was the order of the day.  There was much talk, even from the high command, of a German surrender by November, or in any case by Christmas.  The first two weeks of Lieutenant Flynn's unit history for September is merely a list of towns marched through, nightly bivouacs, as they move through Belgium and Luxembourg to the German border.   There is no hint of foreboding, no sense that desperate times still lie ahead.


On the 1st of September we were well on our way to Compiegne which we reached at dawn.  We detrucked and marched through the town on foot, and were met by the natives who had crawled out from the covers to see what was going on.  They fed us with coffee, biscuits, apples etc.; when they found out that the Americans had arrived and were glad to see us.  We proceeded along the road into the woods beyond the town where we ran into some opposition.  Our Captain, Captain Charles S. Blakeney, was wounded and had to be evacuated.  The enemy finally withdrew, and we remained where we were, awaiting further orders.  Pvt. Jose Mangini was killed in action at an A-T gun position.

The following day we marched back through Compiegne, crossed the river, and proceeded to Bethancourt where we went into bivouac for the night just outside the town.  1st Lt. Cecil E. Necklander was assigned to us, and was made Battalion Supply Officer.

On the morning of the 3rd, Lt. Col. Theodore S. Hatzfeld took over command of the Battalion.  We proceeded on foot from the bivouac area to Noyens, and went into bivouac about 1 mile beyond the town.

Before dawn of the 4th, we entrucked, and rode back through Compiegne, Soissons, Neufchatel, past several military cemeteries of War 1, and ended up near the town of Herpy where we bivouacked for the night.  The following morning we continued the march on foot to the town of Neuvizy, on the 6th to a point near Thelonns.

On the 7th, we left Thelonns on foot on walked until 1200 when we entrucked and rode to Liney where we bivouacked for the night.

On the 8th, we proceeded on foot, crossed the Belgian frontier, and were held up temporarily by enemy in the town of Haudrigney.  They were soon routed, and we proceeded into the town where we spent the night.  The next day was payday for us.  Captain Fischer was made Company Commander, and Lt. Harvey was assigned to the A-T Platoon.  Around noon we left Haudrigney by foot and marched to a point northeast of Chatillon where we bivouacked for the night.

On the 10th, we proceeded on foot through Messancy where the townsfolk were right on deck with a goodly supply of bread and jam to go the rounds.  We ended up about a mile east of Guerlange early in the afternoon, and took it easy for the rest of the day.  Major Alexander F. Leith was reassigned to us as Battalion Executive, and Captain Dana, whom we shall certainly miss, was assigned to regimental headquarters at S-3.

On the morning of the 11th, we entrucked and went in a northerly direction through Arlon, and turned about several miles north of there, retraced our route, went into the Duchy of Luxembourg, the City of Luxembourg, and ended up late at night at Senningen where we spent the remainder of the night.
On the evening of the 12th, we proceeded to Junglinster, home of the very elaborate Luxembourg radio transmitter, and bivouacked for the night.
On the 13th, we proceeded to Rippig, where we stayed until the 15th, when we marched to Breuch, several miles distant.  We had an opportunity to see "Gaslight" in a barn while there.

On the 18th, we left Breuch, and the Battalion assembled at Beidweiler early in the evening, where we entrucked to go to Wallendorf, Germany.  We had to stop near Fals at about midnight, where we remained until daybreak, and then continued on our journey to relieve the 1st Battalion.  We passed through Wallendorf, and were on the outskirts of Beindorf, when the enemy opened up with rifles, machine guns, mortars, and artillery.  We were really caught with our pants down, so to speak, and we still had several miles to go before contacting the 5th Armored Division, to whom we were temporarily assigned.

It was a real hot spot for a while, but the line companies held their ground and we managed to get organized eventually.  Major Leith was among the missing, and although we hoped he would turn up, we were afraid he might be in the process of getting an oak leaf cluster attached to his Purple Heart.  Lt. Harvey was wounded and evacuated by the 5th Armor Medics.  PFC Klir was killed, T/Sgt. Nurnburger was wounded, as were Cpls. Giglio and Pruett, and PFCs Boyd, Howes, Riley, and Pvt. Silverstein.  We lost one A-T gun and prime mover, the A-T jeep, the No. 3 jeep used for liaison with Regiment, one two and a half ton truck (ammunition) and trailer, and the trailer to the other ammunition truck, all loaded with ammunition, rations, and rolls for the Battalion, and the maintenance truck was well beat up by a shell that exploded right beside it.  Early in the evening we proceeded to a point near Crutchen, which was to be attacked by the Battalion at daybreak.

However, the orders were changed, and at midnight we withdrew to Wallendorf, crossed to river, and went into Reisdorf and set up the CP.  The operation was supposed to be a deceptive move to make the enemy concentrate a lot of his personnel and material in that sector, thereby weakening some other spot of the Seigfried Line.  We don't know how it was at the other spots, but from what we saw, we'd say it sure was successful in our sector.

Major Leith turned up that morning, and although he was unhurt, he was severely shaken by his ordeal.  He stayed at Reisdorf until 1230 on the night of the 21st, when we withdrew to Bettendorf.  the following morning we entrucked and left at 1100 for Eschweiler, arriving at 1300.

We stayed in Eschweiler for two days, during which time the officers drew their liquor ration, consisting of 1 quart of Black and White (pure Scotch), and one pint of gin.  We had a movie while we were there, "Show Business," with Eddie Cantor.

On the 24th, we moved back to Beidweiler [?], and on the 25th, we were relieved by the 83rd Division. S/Sgt. Humphrey, PFC Grege, and Pvt. Geary were given the Purple Heart for wounds previously received.  Major Leith was ordered to take a rest and was relieved by Captain James W. Graham.  Captain Fischer was assigned to the 1st Battalion as Executive Officer.  We shall miss him too.  Captain Nesbitt was assigned to the Company as Commanding Officer, and Captain John B. Pruden was made S-3.  Lt. Kermit A. Gimre was assigned to the A-T Platoon.  We received 8 new replacements, T/5 Haimon, PFCs Pennington, and Stankevicus who was previously with us, and had to be evacuated because of wounds.  We are glad to see them back again.

On the 26th, we left Beidweiler for a point about 2 miles southeast of Burg-Reuland on the German border, supposedly for a rest, showers, clean clothing, etc; The Red Cross Clubmobile was there to greet us with hot coffee, doughnuts, and music to soothe the savage breast.

As the month closes, we are still here high on a windy hill, amid the rain and
dampness, of which we have had more than a fair share this month, and according to the law of averages, we are sure do for a lot of sunshine.

Oh yes, and we must not forget to say that Lt. Orozco, our own G-2, along with 3 members of the intelligence section, namely PFCs Zielkowski, Hennert, and Sidney, have a nice write-up in the Invader, which is the Division daily newspaper, on how they succeeded in capturing a company of the enemy.