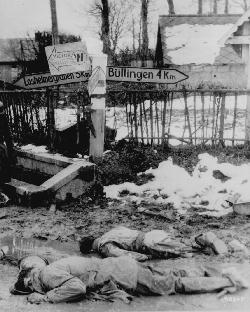 On 1 January, we are still in a wooded area south of Sadzot, attached to the 75th Division, with the mission, as part of the Battalion, of closing a gap between 2 Battalions of the 289th Infantry.

At 1500 the 2nd and 3rd Platoons and F. Company attacked the enemy position in the thick woods on the high ground.  Lt. Grossman, T/Sgt. Stephens, PFC William & PFC Van Ea---age were all wounded by enemy small arms and shell bursts and evacuated.

It was necessary to withdraw to the original position for the night.

The 1st Platoon set up a defensive position to the extreme left of the Company, on a hill near the [ ? ] of the enemy.

We held these positions until the morning of the 4th when at 1000 E, F, & G Companies, with F on the right, attacked the position by marching [?] fire, and the area cleared of the enemy, after which we assembled, were picked up by trucks, and taken to the town of Aywaille.

The men were glad to have left the Sadzot area, because due to the fact that the enemy was dressed in the "G.I." clothing, which they had taken from our dead, it was hard to tell who was friend and who was enemy.

Lt. Kauffman, Lt. Hadley, & [?] for their having come across 3 Germans who were dressed in "?.?." clothes with the exception of one who was wearing a German helmet, & had it not been for Lt. Kauffman's knowledge of German, the incident might have had a different ending than it did.  As it was, one of the Krauts asked Lt. Kauffman if he were German, to which Lt. Kauffman answered "Ja wal."  This threw the Krauts off guard long enough for Lt. Kauffman, Lt. Hadley, & [?] to fire at them.  One did get away and he was making tracks when last seen, --but fast.

On the 5th we left Aywaille by trucks and moved to [?] where we detrucked and marched to a bivouac area arriving 1700.

On the 6th we moved to an assembly area with the Battalion where we were to wait while the 1st and 3rd Battalions attacked and took the town of Aisinant [?], and then move up to a reserve position.

At about 1500 we were ordered to move up.  The 1st Platoon formed the advance party followed by the 2nd and 3rd.  We passed through Trois Ponts and made contact with the 3rd Battalion just south of Aisinant [?].

We were given the mission of protecting the left flank of the regiment.

On the next morning  we moved to Aisinant, still with the same mission.  The 1st Platoon was on the right, the 2nd on the left, and the 3rd took up a defensive position in the town.

On the 9th we were relieved by the 106th Division and returned to Trois Ponts where we were picked up by trucks and moved to Sant-les-Spa.  Here the men were billeted in houses and had showers that night.  We also had hot meals here.

On the 10th we moved at 1200 for Stavelot where we relieved the 30th Division who were defending the south side of the river that runs through the city.  While here we were attached to the 30th Division.  E. Co. was on the right flank of the Battalion.

On the 11th at 2100 we were alerted to move by 0600 of the 12th.  We were relieved by B. Co. of the 57th Parachute Battalion.  From Stavelot we marched to ?-ville.  Here we waited several hours for trucks to arrive to take us to St-? in France, arriving at about midnight.  Here we were billeted in buildings for the remainder of the night.

On the afternoon of the 13th  we relieved G. company of the 109th Infantry, which was in a secondary defense along the Meuse River from  St-? to Dun-sur-Meuse.

On the 19th we left [?] by truck and made to Kayserberg.  Here we detrucked, and marched to the top of the hill due south of Kayserberg where we relieved one company of the 63rd Division.

From the time we left Stenary, we were attached to the 3rd Army, the 7th Army, the 1st French Army, and the 15th Army.

There is a lot of snow here, and it is necessary to be supplied by mules, as the vehicles cannot get through the snow and [?] trails to our position.

We are on the left flank of the Battalion and from our position we can see the Jerries on the next hill due south of the same river we are on.  They can see us as well, being that our positions are quite exposed, and we have to keep our movements at a minimum to keep from drawing artillery & mortar fire, not to mention the snipers.

On the 23rd the 1st lt. [?] was sent forward through a gap in the minefield covering the Company front with the mission of making contact with the enemy and finding his main line of resistance.

They left at 0700 after a barrage of artillery and mortar fire, and crossed the draw [?] before daylight, and started up toward the B--thalkapf [?], the peak directly to the front of the position [?] of our company.

The mission was accomplished without having to engage the enemy although they were to the right and left and in front of the Platoon.  They returned at 1600.

Pvts. Grath, Hablis, Tierney, and Wattenberger were killed by artillery bursts.  S/Sgt. Shoemaker, Pvts. Gilmore and Danon were wounded by the same bursts and evacuated.  PFC Carl Wood and PFC Simmons were both wounded by anti-personnel mines and evacuated.

On the 24th T/Sgt. Conrad and 15 men from the 3rd Platoon went through the left minefield gap, to contact the enemy to our left front.  The mission was accomplished in spite of little or no concealment without having to engage the enemy.  The patrol returned at 1700.

On the 27th, an O.P.  was set up in A. company area (they are on our left), to observe enemy movements etc.; and thus do away with the patrols.

Except for spasmodic artillery and mortar fire, and some sniping, back and forth, things remained relatively quiet through the remainder of the month.

The men have been getting passes to Paris for 72 hours plus travel time.

As January ends, there is still plenty of snow on the ground, and it is cold enough for all concerned although not too severe, ??? we are all wondering what the next month holds in store for us.